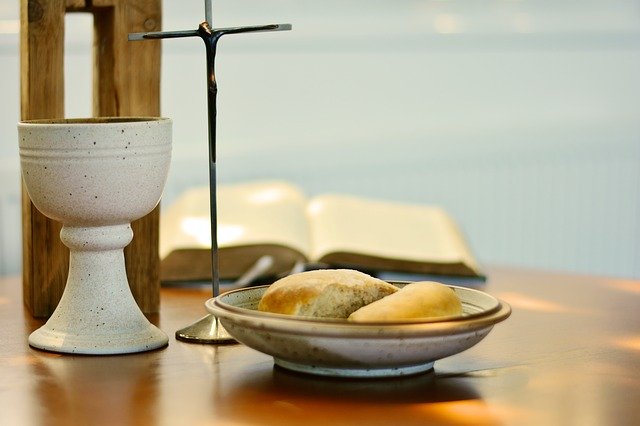 Christian artistic tradition is rife with symbolism. Generations of Christian artists have made use of symbolic libraries of colors, objects, animals, plants, gestures, and even the human body to interpret scripture and tradition through images. The following list gives a brief description of symbols used in Christian art, their meaning, and their origin when known. Catholic artistic tradition assigns to the saints particular symbols that reveal the Saint’s martyrdom, miracles, or circumstances of their lives.

For a list of Saints and their particular emblems, see: Symbols of the Saints.

The list is divided into six sections: plants, animals, sacred objects, sacred dress, colors, and parts of the body. This is a work in progress, so please check back for updates.

White symbolizes the purity of the soul, innocence, and holiness. White is a symbol of purity and virginity, from whence derives the tradition of the white wedding dress and the white robes and collars worn by Christian clergy. The virgin Mary wears white in images of the immaculate conception, and under her blue robes in other portraits.

Black is an ancient symbol of death and mourning; it is routinely used to symbolize the devil, the underworld, witches, and mourning- except when paired with white, the color of purity, whereby it becomes a symbol of humility.

Brown and gray are symbols of humility and earthiness; gray is also a color of mourning.

Blue is thecolor most often associated with the Virgin Mary, portrayals of thew Virgin and the living Christ (ie, Jesus before the crucifixion) wear blue mantles. Blue symbolizes truth and clarity, it is the color of the sky, and therefore a symbol of heaven.

Green symbolizes life and vegetation, and is an emblem of the resurrection.

Yellow/gold is the color of the sun, it symbolizes divine radiance, revelation, and revealed truth. yellow can also be used as a symbol of the devil, and of the apostle Judas, where it symbolizes deceitfulness and betrayal.

Red is the color of love, anger, passion, and blood. it is used in the Church to denote the staus of Cardinal, and is a predominant color in images of martyrdom. Red is also the color of Pentecost; symbolizing the fiery nature of the Holy Ghost. Worn by the virgin, it is the emblem of lifesblood.

The royal color purple is a symbol of power, and often represents God. In other uses, it symbolizes repentance and sorrow, and is often used to represent the mourning for Christ crucified in the weeks leading up to Easter.

The Lion is a traditional symbol of solar energy, and this symbolism carried into Christianity with its attributes intact. it is a symbol od strength, fortitude, and wisdom. In some cases, the lion represents the Hebrew Tribe of Judah, in which case it is likely to carry a banner. A winged lion (tetramorph) represents the Apostle Mark. The lion is frequently pictured alongside saints Anthony and Jerome.

The Lamb most often represents Christ, symbolism drawn from numerous references in scripture. (John 1:29: Behold the Lamb of God) When the lamb is pictured with Jesus, as in “good shepherd” poses, it represents man as redeemed sinner. When the lamb bears a cruciform banner, it represents John the Baptist as the first to recognize the “lamb of God.”

The Ox and Ass are symbols of the nativity, and are drawn from the apocryphal gospel of Pseudo-Matthew, which quotes Old Testament prophecy: “and the ox and the ass adored Him. Then was fulfilled that which was said by Isaiah the prophet, saying: The ox knoweth his owner, and the ass his master’s crib. due to references in the Old Testament, most notably” The ass was the conveyance of the pregnant virgin, and was so highly esteemed by early Christians that they were accused of donkey-worship.

The Ape is a symbol of the lower nature of man, and represents lust, avarice, malice. Satan sometimes appears in the form of an ape. An ape in chains represents sin conquered.

A dragon in Christian art represents sin and the sinful nature, and is also a common way of depicting the devil, especially in the context of devourer. A number of saints are depicted defeating or otherwise overcoming dragons.

The dolphin is a very ancient Christian symbol, and is drawn from earlier Greek and Roman symbolism. The dolphin was traditionally regarded as a psychopomp, leading souls to safety, and in this sense came to represent the church as guide of souls into paradise.

The snake or serpent is the most unusual symbol, because it represents both good and evil, depending on context. As the serpent of Eden, often pictured with human face (inevitably female), the serpent is the embodiment of Satan.In other contexts, the serpent symbolizes craftiness or even wisdom.

The peacock is an ancient symbol of immortality. The tail of the peacock, with its ‘thousand eyes’ are symbolic of omnipotence and often ascribed to the Archangel Michael. The peacock’s feather is sometimes associated with St. Barbara.

The phoenix has been a symbol of Christianity from the very first century, when it was used on jewelry, amulets, and inscribed on tombstones. As the phoenix was long rumored to continually renew itself through death and rebirth, it was a perfect emblem of the resurrection and the promise of eternal life.

The dove is the traditional emblem of the Holy Spirit, and is mentioned numerous times in scripture. The dove is the bird who brings to Noah the olive branch symbolic of God’s covenant with man, and again appears at the baptism of Christ. Because of this, the dove is used to represent grace and the seven gifts of the Holy spirit.

The palm-branch of victory is a very early symbol of Christianity; its image often accompanied martyrs to symbolize their “victory” over earthly temptations and misery. The palm was in long use by the Romans as an emblem of victory before Christianization and carried over. The leaves of the palm also figured in the New Testament, carried by the crowd who met Jesus upon his” triumphal entry” into Jerusalem.

The lily is a symbol of purity, chastity, and simplicity. As such, it is the emblem of the Virgin Mary, and often appears in scenes of the annunciation.

The reed is one of the emblems of the Passion, the instrument by which the sponge soaked with vinegar was administered to Christ on the cross. The reed is also an emblem of John the Baptist, an emblem of his baptismal ministry at the river Jordan.

The olive is symbolic of fertility and abundance, of hope and new beginnings, and, of course, peace. The olive tree is mentioned numerous times in the old testament, as olives were a staple crop for the Hebrews. The olive branch as a symbol of peace stems from the Old Testament story of Noah, who sent out a dove at the end of the great flood. The dove returned with an olive branch, which became a symbol of peace between God and man.

The pomegranate is an ancient symbol of wisdom. In Christian art, it often represents the Church, the seeds within individual congregations.

The rose is the ancient symbol of Venus, the Roman goddess of love. In Christianity, the rose has a variety of meanings. A white rose is an emblem of purity; the red, martyrdom. A ring or garland of roses is the emblem of the Virgin Mary, and the basis of the rosary. A yellow rose is reserved as a symbol of papal benediction.

The crown is the mark of royalty; it is a symbol of divinity. It is common to find crowns on saints. On the Virgin Mary, it symbolizes her role as the “Queen of Heaven.” The crowned tiara or triregnum of the Pope represents his authority over earth, heaven, and the Church. See also: crown of thorns and instruments of the passion

The mitre is the ancient liturgical headdress worn by Church officials from bishops up to the Pope. The shape of the miter is believed by some to be derived from the ceremonial dress of the highest initiate of Mithraism.

The stole is a symbol of the office of priest in the Catholic Church, and symbolizes the “yoke of Christ.”

The chasuble is the robe of the cleric, worn by priests, Bishops, Cardinals, etc. it is worn in imitation of the royal garment bestowed mockingly on Christ as “King of the Jews” before the crucifixion. The color is determined by the season on the liturgical calendar- purple for Easter, etc.

The tonsure is the haircut of the monastic, wherein the top of the head is shorn in mimicry of the crown of thorns.The tonsure was most likely adopted from the customs of British Druids. The “Fisherman’s ring,” a signet with the image of the apostle Peter as a fisherman, is the traditional signet of the Catholic Papacy, now worn as an emblem of the Pope’s authority.